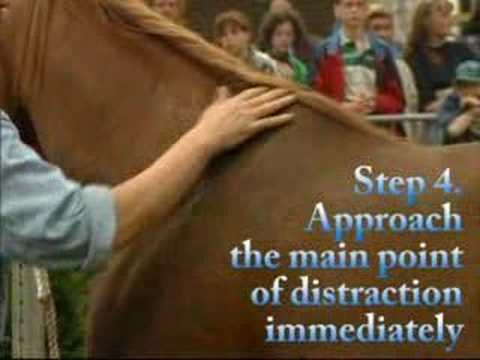 
Klaus is converting an extremely shy arabian during a performance into a trustful fellow.
http://www.hempfling.com/
Explanation of the individual steps shown in this video, where KFH works with a green horse:
Step 1:
For Klaus the most important ability is to recognize the horse’s real nature. In general he sees the First encounter as an extremely important moment — it is the moment where he can bring the horse back to its real nature and its true character.
Step 2:
It is never possible for Klaus to go against the horse — he needs its cooperation to work together with him. Only the horse itself can carry through the change, so from the very start Klaus is acting as its supporter.
Step 3:
According to Klaus’ point of view it is only possible to transmit the inner energetic processes to the horse through an optimal body-awareness. The basics of this issue are explained in his book “Dancing With Horses” and in the DVD Learning Box (in preparation).
Step 4:
Furthermore it is important by the first encounter that the horse is immediately taken to its ‘wound points’ and to the zones of approaching its problems. This is a part of the foundation of Klaus’ work.
Step 5:
Klaus’ way of leading the horse is based on natural authenticity. Also this is an important foundation of his togetherness with horses. In his courses Klaus always addresses especially this issue.
Step 6:
After their first encounter with Klaus horses are extremely open and cooperative — that means a big responsibility for the humans, because they are so vulnerable.

Klaus Ferdinand Hempfling, with his professional background in communications has shaken up the international horse world. He is at the forefront of new ideas on working and interacting with horses. The basis of his work is consideration for the horse’s psyche, communication via a body language that is understood by the horse and interaction with these powerful, beautiful, dignified creatures in accordance with nature. The development of the rider’s “presence” and an orientation to holistic principles is integral to this work. Klaus’ first book, “Dancing with Horses” (translated into more than 10 languages), met with overwhelming international success; thousands of spectators have witnessed a way of interacting with horses that made the horses the teachers, the bearers of mysteries, whose proximity could transform human lives.

Klaus has the ability to “know” a horse within a few seconds and within a few minutes of the first meeting, he establishes a relationship so firmly that anything after that is completely based on trust. In his Borderline Demonstrations he transforms dangerous, nervous, traumatized, any kind of horse into cooperative companions. They recognize him as their leader, and become willing partners in groundwork and under saddle.