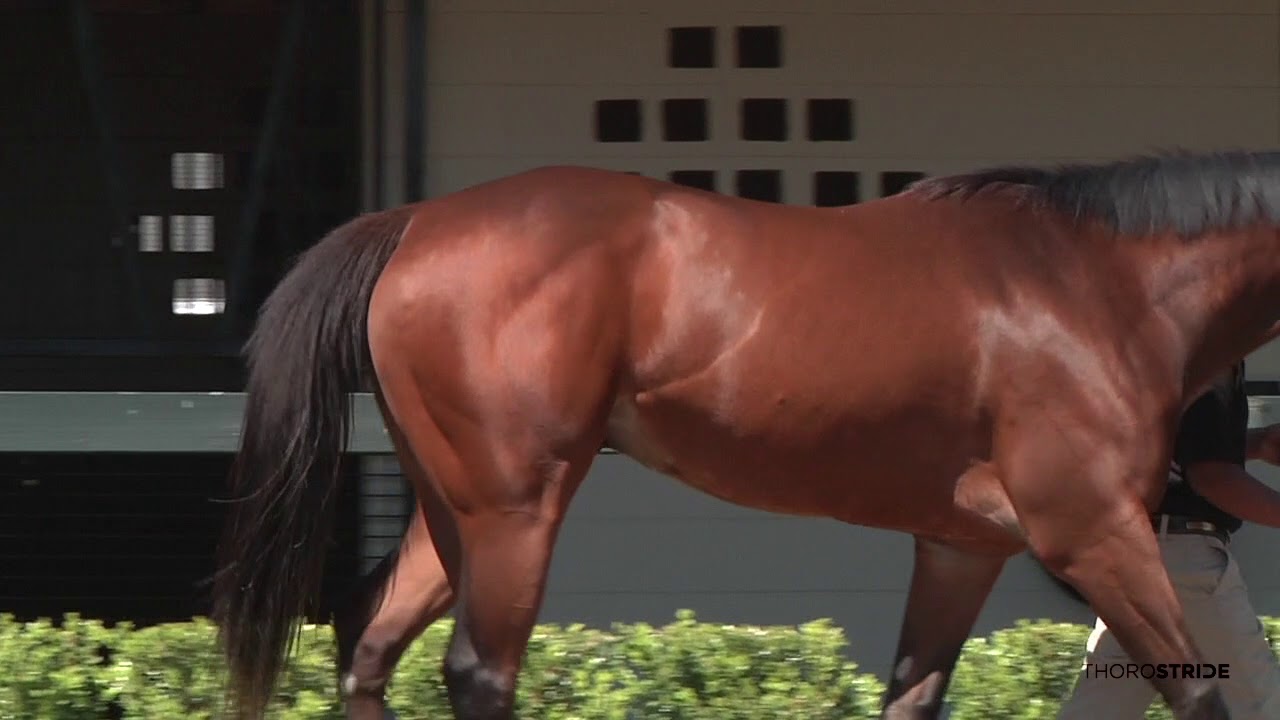 DEL MAR, Ca – The Barretts Spring 2-Year-Olds in Training Sale, which combined the company’s traditional two juvenile auctions for the first time, was topped Wednesday by a $600,000 son of Uncle Mo. West Point Thoroughbreds’ Terry Finley made the winning bid on hip 14, who was consigned by Eddie Woods.

“Like it is across the country, the highly desirable horses are easy to sell,” said Barretts General Manager Kim Lloyd. “There are people after them, there is a lot of competition for them. But for the horses that the market isn’t fond of, it’s tough sledding. We saw that again today.”

Barretts combined the two auctions in an attempt to present buyers with a larger catalogue of potential purchases and sellers with a broader buying base to market their product.

“I didn’t have any negative comments about combining the sale,” Lloyd said. “Actually everybody was positive about it, the consignors and the buyers. We had a bigger catalogue–and everybody likes that. We had a huge turnout at the preview, we had a great turnout in the barn area and even here at the sale today there was a big turnout. The market determines the prices on the horses. But everything was in place today.”

Of the combined marketplace, Lloyd added, “I think it opens the door for opportunities to sell a horse. I really do. I saw it today.”

West Point Thoroughbreds provided the early fireworks at Barretts Wednesday, seeing off a pair of challengers to secure a colt by Uncle Mo for $600,000. Consigned by Eddie Woods, hip 14 is a California-bred 2-year-old out of Fresia (El Prado {Ire}), a half-sister to multiple graded stakes winner His Race to Win (Stormy Atlantic).

“I thought he was a beautiful horse,” West Point’s Terry Finley said after signing the ticket on the colt alongside bloodstock agent David Ingordo. “I thought he was a horse that would have fit in either of the first two sales [OBS March or Fasig-Tipton Gulfstream sale] we came to. The fact that he is a California-bred, that was just icing on the cake. He was a very special horse.”

West Point has a group of promising prospects by Coolmore’s Uncle Mo and Finley said he is quickly becoming a fan of the stallion.

“We like Uncle Mo–this class of 35 horses that we are going to come to the races with, we have four Uncle Mos. So I am starting to warm up to Uncle Mo a little bit more than I was.”

Finley added West Point may eventually have additional partners on the bay colt, who will be trained by Jerry Hollendorfer.

“There should be a couple of others, but I don’t know who is going to come in yet,” Finley said. “We’ll try to figure that out.”

The juvenile, who was bred by Bar C Racing Stables, was making his second trip through the Barretts sales ring. He was purchased by Woods’s Quarter Pole Enterprises for $60,000 at last year’s Barretts Select Yearling Sale.

“He was a spectacular horse who worked well,” said Woods. “He is a beautiful-looking horse who has been uncomplicated all year.”

Woods continued, “He had a little blemish, that he still has, on a sesamoid. When we vetted him, we sent the X-rays to a lot of different vets around the country for multiple opinions and everyone was very comfortable with it. So we were good to go.”

Of the colt’s quarter-mile work in :21 1/5, Woods admitted, “I thought he might actually go a bit quicker. But we weren’t on the same track that we usually work on. This was a little bit of a slower track, a very forgiving track, but a couple of ticks slower than what we’ve seen in the past. And he wasn’t quite ready to work on that kind of track that far, but because he has natural talent, he did.”

Neal and Pam Christopherson’s Oregon-based Bar C Racing Stables purchased Fresia, with this Uncle Mo foal in utero, for $35,000 at the 2015 Keeneland November sale. Fresia had no reported foal in 2017 and was bred back to Harbor the Gold.

Into Mischief Colt to Zedan

Bloodstock agent Dennis O’Neill, bidding on behalf of Amr Zedan, went to $450,000 to secure a colt by Into Mischief from the supplemental catalogue of the Barretts Spring Sale Wednesday at Del Mar. The youngster, who was withdrawn from last month’s OBS March sale due to a minor setback, was rerouted to the Barretts sale and showed up in Southern California with a co-bullet furlong work in :10 flat Monday.

“We thought he was the best colt in the sale and you can’t beat Into Mischief right now,” O’Neill said. “We were prepared to go a little higher–I was kind of surprised it stopped where it stopped. He was an absolutely gorgeous horse. His breeze was great and we got him galloping out really good. We’re extremely excited to have him to say the least.”

Consigned by Ciaran Dunne’s Wavertree Stables, hip 167 is out of Cape Discovery (Cape Town). He was purchased by Ron Fein’s Superfine Farms for $110,000 at last year’s Keeneland September sale. Superfine already had a pinhooking score on the juvenile sales season this year. The operation purchased a colt by Fed Biz for $160,000 at the Keeneland September sale and the youngster sold for $725,000 at the Fasig-Tipton Gulfstream sale.

“He’s just trying to compete at the top and we thought this was the best colt in here. That’s what he wants to buy,” O’Neill said of Zedan’s business plan.

Hip 167, who has been stabled with the Wavertree horses in Barn D on Del Mar’s backside, will only have a short trip to trainer Doug O’Neill’s barn at the oceanside oval.

Bloodstock agent Raymie Lightner, bidding on behalf of Gary Hartunian’s Rockingham Ranch, signed the ticket at $335,000 to secure a filly (hip 109) from the first crop of Grade I winner Will Take Charge (Unbridled’s Song). The chestnut filly is out of multiple stakes winner and multiple graded stakes placed Trip for A. J. (Trippi). She was consigned by Becky Thomas’s Sequel Bloodstock.

“From the start, she stood out,” said Lightner. “She looked good on the track–she galloped out strong and looked good doing it. And she had great conformation. There was nothing not to like about her. She was the one we zeroed in on from the start. We are tickled to death to have. She did it all for us.”

Peter Miller will train the filly for Rockingham Ranch. Hartunian’s operation, which won a pair of Breeders’ Cup races last fall, had the second and third-place finishers in last weekend’s G1 Dubai Golden Shaheen and the runner-up in the G1 Al Quoz Sprint.

The Will Take Charge filly, bred by Lynn Schiff, was purchased by Thomas and Al Pike for $100,000 at last year’s Fasig-Tipton July Yearling Sale.

Solis is All Smiles for Cal-bred Colt

Bloodstock agent Alex Solis, bidding on behalf of a partnership that will include the Roth family’s LNJ Foxwoods, went to $200,000 to secure a colt by Smiling Tiger during Wednesday’s Barretts sale. Out of Perfect Feat (Pleasantly Perfect), hip 63 is a full-brother to stakes winner Spiced Perfection and he worked a co-bullet in :10 flat Monday at Del Mar.

“He breezed really well, he is a big-striding, efficient horse,” Solis said of the colt’s appeal. “He galloped out really well. He’s very well-balanced. And he’s a full to a nice horse.”

Solis continued, “I think, for a Cal-bred, he’ll be a lot of fun to have. The Cal-bred program is so great now. We are breeding Straight Fire (Dominus) in California right now for that exact reason. This is a good way for them to get a taste for the Cal-bred market.”

Multiple Grade I placed Straight Fire was campaigned by a partnership which included Jungle Racing, LNJ Foxwoods and KMN Racing. He now stands at Legacy Ranch.

Hip 63 was consigned by Havens Bloodstock Agency on behalf of breeder Premier Thoroughbreds, which purchased Perfect Feat for $7,500 at the 2014 Barretts January sale. Owned by Phil Lebherz, the burgeoning Premier Thoroughbreds matched that result later in the sale when hip 75, a filly by Violence brought $200,000 from Blinkers On Racing Stable.

Solis said he was happy with Barretts’ new combined 2-year-old in training sale.

“It’s much better having more horses,” he said. “I think it’s a good thing. I think they need to build on it still, but it’s a good start. They are selling horses for a lot of money still.”