Sydney based New Zealander Chris Waller is to be inducted into the New Zealand Racing Hall Of Fame. Waller moved to Australia in 2000 and since then has won the last seven Sydney training titles as well as being Australia’s leading Group 1 trainer the last few seasons; however he is become internationally known for his handling of the brilliant Winx (Aus) (Street Cry {Ire}) who has won the last three running’s of the G1 Cox Plate. Joining Waller in the Hall Of Fame next month will be NZ trainer Murray Baker who apart from being the pre-eminent trainer in his homeland, has won 21 Group 1 races in Australia, a record for a New Zealand based trainer.

Midnight Bisou (3, f, Midnight Lute-Diva Delite, by Repent) is a maiden no more as she graduates with a convincing win in the GII Santa Ynez S. Sunday at Santa Anita.

The dark bay came out of two narrow nose defeats to GI Starlet victress Dream Tree (Uncle Mo), including her latest in the Desi Arnaz S. Nov. 18 at Del Mar.

Midnight Bisou traveled in the five path as the field bunched up exiting the chute before being taken back to sit off a :22.38 first quarter set by ‘TDN Rising Star’ War Heroine (Lonhro {Aus}). She was still under a tight hold by Mike Smith as she made a four-wide move around the far turn and took the advantage turning for home, kicking away to a 5 1/2-length score. Steph Being Steph (Majestic Warrior) grabbed second by a nose over the favorite Win The War (War Front).

This is the first stakes winner out of Diva Delite, who captured the 2010 GIII Florida Oaks. She also has produced a yearling colt by Warriors Reward.

MCKINZIE (c, 3, Street Sense–Runway Model, by Petionville) took his perfect record to three-for-three with a decisive score in the GIII Sham S. at Santa Anita. Tabbed a “TDN Rising Star” after an impressive first out score in Arcadia Oct. 28, the $170,000 KEESEP buy crossed the wire 3/4 of a length behind GI Breeders’ Cup Juvenile runner-up Solomino (Curlin) in the GI Los Alamitos Futurity Dec. 9, but was promoted to first after his stablemate was disqualified for interference. Shedding blinkers this time, the 1-5 chalk kept close tabs on the leaders from a two-wide third as All Out Blitz (Concord Point) clocked early fractions of :23.69 and :47.73. Readily responding when given the signal on the backstretch run, McKinzie overtook the pacesetter in early stretch and stormed clear for a four-length victory in 1:36.58. This was the fifth Sham victory for Hall of Famer Bob Baffert, whose prior wins came with Collected (2016), Midnight Hawk (2014), Bob and John (2006) and Wild and Wise (2001, inaugural running).


“For the largest range of western saddles in the USA please visit http://www.texansaddles.com”
Now,
Take a little trip to the Scottsdale Arabian Horse Show… Pretty Arabians and all the riders and people..
Have fun 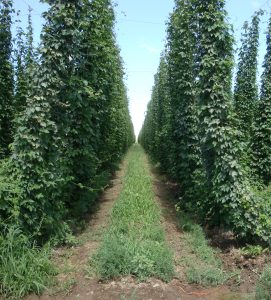 It’s hard for much to make the news other than politics these days.  But the world keeps on turning, we keep on eating, and growers keep trying to meet consumer demand. Two recent CSANR reports provide updates on organic trends – one on the organic sector in Washington State in general, and one specifically on organic tree fruit.

In 2016, demand for organic foods grew once again reaching a new high of $43 billion of retail sales in the U.S. Sales grew at 8.4% over the previous year, a bit lower than the 10-12% annual growth since 2009. Global organic food sales were estimated at $81.6 billion in 2015 (the most recent year); U.S. sales made up 48% of this, with Europe accounting for 39%. Sales in Asia reached 8% and have been steadily increasing. Details on global organic trends can be found at World of Organic Agriculture . The most recent national sales summary is at the Organic Trade Association.

One story that did make news is Amazon’s purchase of Whole Foods Markets in June. This could be an important new source of growth for organic foods via the expanding on-line grocery business. It could also help provide investment to boost the supply of domestic organic production.  Organic food imports have skyrocketed in recent years, leading to a record $1.1 billion organic trade “deficit” in 2016.  Big drivers are tropical imports (coffee, bananas), and corn and soybean for animal feed despite the fact that the U.S. is a major exporter of these crops conventionally grown.

A “river” or organic Honeycrisp apples on their journey to the consumer. Yakima Valley. Photo: D. Granatstein.

The biggest organic news in Washington is the rapid expansion of organic apple production. Already the state supplied over 90% of the fresh organic apples grown in the U.S. But supplies have run out in most years and there appears room for more production.  Innovations in storage technology that are organic compliant, such as Dynamic Controlled Atmosphere and ozone systems, are helping to extend storage life for organic apples, which will be key to successfully handling a larger crop and to supplying markets for more months. Some companies are now able to provide nearly a 12-month supply of certain organic apple varieties. New varieties from the WSU breeding program such as ‘Sunrise Magic’ and ‘Cosmic Crisp’ exhibit particularly good storage characteristics that may be helpful for organic fruit specifically. Organic apple prices have been running 50-100% more than conventional for several years and have induced a wave of transition of orchards to organic.  There could be 10,000 acres of new organic apple production in the next few years, adding to the 16,000 ac certified in 2016.

Washington growers had over 24,000 acres of certified organic vegetables in 2016, another new record. The bulk of this production goes to processing, such as frozen sweet corn, green peas, green beans, and carrots. The USDA 2015 Certified Organic Survey estimated that Washington was the top producer of organic potatoes, onions, and sweet corn in the country, and was second for green peas, carrots, and other vegetables. 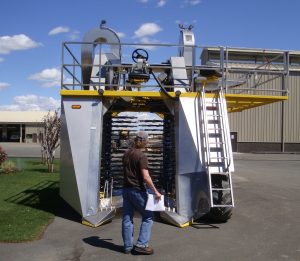 Acres of grains, beans, and oilseeds have risen sharply since 2013 and reached a new high in 2016. Wheat accounts for about 60% of this area, and was increasing in both western and eastern Washington. Acres of dry beans also took a big jump.

Dairy cow numbers reached 9,000 milkers and dry cows, which was the previous high in 2008.   Organic dairy cows were about 3.3% of the state dairy herd. Statewide production was about 11.7 million pounds of milk  per month and has increased 70% since 2011. Washington organic milk sales were an estimated $32 million in 2015, making the state #10 in the country. The state is the national leader in organic egg production, with $87 million in sales in 2015, some 12% of the national total.

The economic value of organic agriculture to the state is significant. Farmgate sales were estimated at over $600 million in 2015. If considered one commodity, organic would be the 7th most valuable agricultural product in the state. Eastern Washington farms generate 87% of the organic sales from 68% of the acres. The focus on specialty crops in the state that tend to be high value gives Washington the highest organic sales value per acre in the country – $8,694 per acre in Washington compared with $3,082 in  California and a national average of $1,413. Significant additional value is generated in packing and processing. The value generated from Washington organic farms has become increasingly concentrated on farms with over $1 million in gross annual farmgate sales. These farms accounted for an estimated 85% of all farmgate organic sales in the state in 2015, compared with less than 2% from all the farms with less than $100,000 annual sales. Most of the expansion of organic production is on farms already with certified land rather than from new entrants, which is helping to drive this economic concentration.

There have been political ripples that might well influence organic. One Congressman has proposed getting the government out of organic certification, which would create havoc for a period. The USDA National Organic Program is finding it difficult to finalize rule changes that have been underway for years and have broad consensus support (e.g., animal welfare) due to slowdowns on all new rule-making. Future challenges may come from various labeling changes for ‘natural’ products as well as definitions of genetically modified organisms. However, a lot more organic acres will be needed to meet industry projections of organic reaching 20% of U.S. retail food sales, up from the current 5%. More acres could come under organic management as research and grower innovation finds ways to produce organically for equal or less cost than current conventional practice. This would enable organic management without the need for a price premium, and some of the practices could generate revenue for ecosystem services such as carbon credits as those markets develop.  Thus even though future market trends may be uncertain, organic systems are likely to remain as experience and analysis show that some key organic principles such as healthy soil and biodiversity can pay their way over time.

All Systems Go For Win the War in Santa Ynez

On paper, Sunday’s GII Santa Ynez S. goes through Gary Barber and John Oxley’s Win the War (War Front), who brings a perfect two-for-two record into the seven-furlong test. But it isn’t as if there aren’t questions to be answered as she tries a conventional dirt surface for the first time and faces several promising locally based gallopers.

A $700,000 acquisition by the high-powered duo at the 2016 Fasig-Tipton Saratoga sale, Win the War endured a wide trip and overcame her inexperience to narrowly land her six-furlong debut over the Woodbine turf Oct. 20. Taking the next logical step in the Nov. 19 Glorious Song S. on the synthetic, she was the only other horse in the market at 9-2 behind ‘TDN Rising Star’ and 1-5 chalk Grace and Dignity (Animal Kingdom) and took advantage of a wicked early pace involving the favorite to romp in by 11 ½ lengths. The surface switch is an obvious concern, but her half-sister Dixie City (Dixie Union) won the GII Demoiselle S. on the main and another stakes-placed half-sister Union City (Dixie Union) produced MGSW & G1SP ‘TDN Rising Star’ Unified (Candy Ride {Arg}).

Midnight Bisou (Midnight Lute) remains a maiden after two starts, but has earned this crack at graded stakes level. The dark bay belied debut odds of 21-1 to just miss behind future GISW Dream Tree (Uncle Mo) while pulling some seven lengths clear of Allianna (Flat Out) going six furlongs over this track Oct. 27. She ran a similar race behind that Bob Baffert trainee when last seen in the Nov. 18 Desi Arnaz S. at Del Mar, missing by a nose, and picks up the services of Mike Smith Sunday.

Just a Smidge (Into Mischief) earned the ‘TDN Rising Star’ distinction for a smooth debut success July 19 at Del Mar, but things haven’t gone to script since. A deceptively good third behind front-running Artistic Diva (Munnings) and Steph Being Steph (Majestic Warrior) in the Oct. 22 Anoakia S., the gray adds blinkers off a failed turf try in the GIII Jimmy Durante S. at Del Mar Nov. 25.